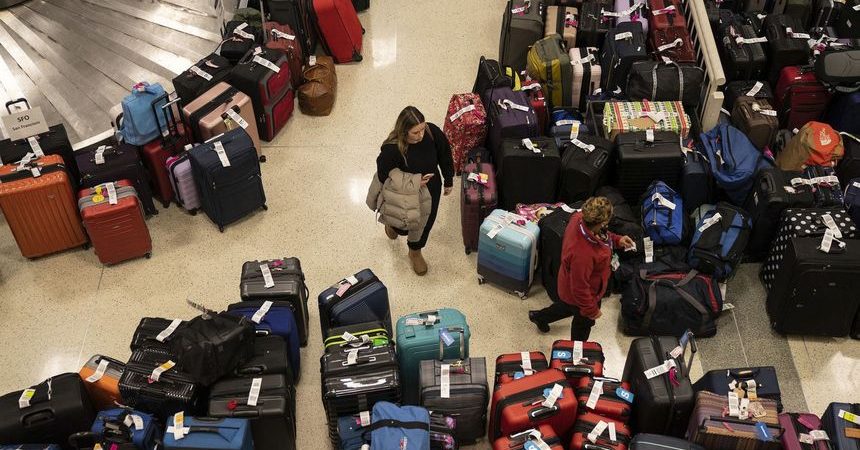 The Southwest Airlines Co. meltdown that stranded thousands of passengers during one of the busiest travel weeks of the year exposed a major industry shortcoming: crew-scheduling technology that was largely built for a bygone era and is due for a major overhaul.

Southwest relies on crew-assignment software called SkySolver, an off-the-shelf application that it has customized and updated, but that is nearing the end of its life, according to the airline. The program was developed decades ago and is now owned by General Electric Co.

During the winter storm, amid a huge volume of changes to crew schedules to work through, SkySolver couldn’t handle the task of matching crew members and which flights they should work, executives of the Dallas-based carrier said.

Southwest’s software wasn’t designed to solve problems of that scale, Chief Operating Officer Andrew Watterson said Thursday, forcing the airline to revert to manual scheduling. Unlike some large rivals with hub-and-spoke networks, Southwest planes hopscotch from city to city, which may have been another complicating factor.

The Morning Download delivers daily insights and news on business technology from the CIO Journal team.

Multiple systems are involved in crew scheduling, according to a spokesman for GE Aerospace. The company said its software isn’t an end-to-end solution. Rather, it’s a so-called backend algorithm that airlines can supplement with other software. The algorithm gathers input from other systems to provide recommendations to resolve crew-related disruptions, according to GE Aerospace.

Analysts and industry insiders say the airline industry is overdue for a massive technology overhaul that would take advantage of highly scalable cloud technologies and fully connect disparate sources of real-time data to better coordinate crews with aircraft. The airline sector has been among the slowest to adopt cloud-based and analytics technologies that could help solve complicated transportation network problems, those analysts say.

Airline operations software historically has lagged behind other technologies because, in part, a small number of providers build dedicated systems that can handle the scale of a major airline like Southwest, said Tim Crawford, a CIO strategic adviser at enterprise IT advisory firm AVOA.

The global airline IT market generated $21.2 billion in revenue in 2019, market research firm Frost & Sullivan said, and leaders include Amadeus IT Group SA, International Business Machines Corp. , and Sabre Corp. , formed in 1960 through a joint initiative between American Airlines Group Inc. and IBM.

Partnerships with cloud providers like Alphabet Inc.’s Google Cloud and Amazon.com Inc.’s Amazon Web Services also are expected to help airlines and solutions providers improve their technologies, Frost & Sullivan said. They are part of the technology-partner ecosystem, which could help them become future direct competitors to airline-software companies, according to Frost & Sullivan.

Much of the complexity behind airline-operations technology stems from the many real-time data points and constraints a single system must take into account, including federal regulations, weather, crew status and location, and aircraft maintenance and routing, said Jahan Alamzad, an airline analyst at consulting firm CA Advisors.

Mr. Alamzad said the most serious IT challenge airlines face stems from the applications developed in silos by vendors or the airlines themselves. When carriers upgrade to newer analytics software to improve the routing of their aircraft, for example, those systems aren’t connected with software they use to manage the crew who work those flights.

While that lack of connection isn’t usually a problem in airlines’ day-to-day operations, it can become disastrous during severe disruptions like the holiday storm, Mr. Alamzad said.

Southwest Chief Executive Officer Bob Jordan said that while the carrier has good systems in some areas, those systems still need “better intelligence to talk to each other.” For instance, he said “The Baker,” an optimization system developed by Southwest to automate disruption recovery and select flights to cancel, needs “better visibility” into its crew-scheduling systems.

Airlines generally have done a better job of maintenance and repair operations, but are much further behind in “the human aspect” of matching up crews, equipment, and passengers, said R “Ray” Wang, founder and principal analyst at IT consulting firm Constellation Research Inc.

Updating technology systems is particularly challenging for air carriers because of the business and operations risk of taking down a system, which can include grounded planes or stranded passengers, Mr. Crawford said.

Southwest recently completed an upgrade of its new reservation system and had been working through multiyear upgrades to systems used in its operations. But it had focused on maintenance and ground operations ahead of crew scheduling, said Southwest’s Mr. Watterson. “At the time that seemed like a proper sequence,” he said.

Other carriers have given priority to upgrading customer-facing reservations platforms and flier loyalty programs over operations systems, Mr. Alamzad said.

Mr. Jordan said Southwest’s meltdown may push forward some of its operations modernization. “I cannot imagine that this doesn’t drive changes to the plan,” he said. “It’s the pace, maybe the level of spending. There may be a change in order of priority.”

—Alison Sider contributed to this article.